Can I convert my BLDS pico amp signal to milligrams per cubic meter?  How should I go about it?

First, what is a pico amp?

A Bag Leak Detection System using the triboelectric principal involves the transfer of an electrical charge from a moving particle to a stationary metal rod.  The transfer of an electrical charge creates a very small current measured as picoamperes which is 10-12 amperes, commonly called a pico amp.  The current transfer occurs by two different means.  The first, referred to in literature as the DC measurement, is a result of direct impact on a surface by a particle.  As particles impact a surface, there is a current transfer from the particle to the surface.  It is the stronger and more linear of the two types of charge transfer and accounts for approximately 80% of the overall measured charge value.  A second, less robust signal is referred to as the AC measurement and occurs as a result of an induced charge transfer as particles move past, but do not contact, another surface.

Second, Is there a linear realtionship?

Modern electronics now allow for the detection and simultaneous processing of both the AC and DC charge transfers, resulting in a reliable, less noise-influenced, and linear measurement.  It is because of this linear relationship that a correlation between picoamps and the particulate concentration measurement is possible.

How can this be accomplished?

Once a triboelectric sensor system is installed and is operating in a constant steady state of operation, operators can arrange for stack tests to measure particulate concentrations(mg/m3) at set intervals. The results of these tests can be compared to the picoamp readings recorded at the same time periods as the concentration tests.  Typical stack test protocols require three or more readings at different time periods and if possible at known differing concentration levels.  The operator then compares the  recorded picoamp signals during the same time periods to build a reliable graph correlating concentration measurements and triboelectric picoamp readings.  An example of a linear regression graph is depicted here.

There is no published standard of picoamp readings for particulate concentration measurements.  Each system will have its individual result based on many factors including but not limited to duct size, velocity, and material.  It is necessary to generate a correlation for each individual system.  However, once in place and running, one can be assured that triboelectric technology will provide a reliable and repeatable indication of concentration.

Although monitoroing and recording in mg/m3 is not necessary for many environmental compliance regulations where using the relative indication of the particulate concentration is acceptable, knowing the correlation can be very useful in understanding the value of the observed baseline signal and therfore where certain alarm threshlolds may be effectively set to insure that the facility does not experience any excursions beyond their complaince limits. 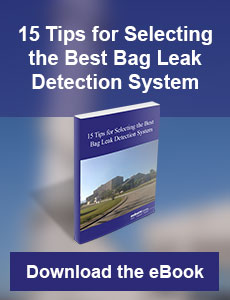